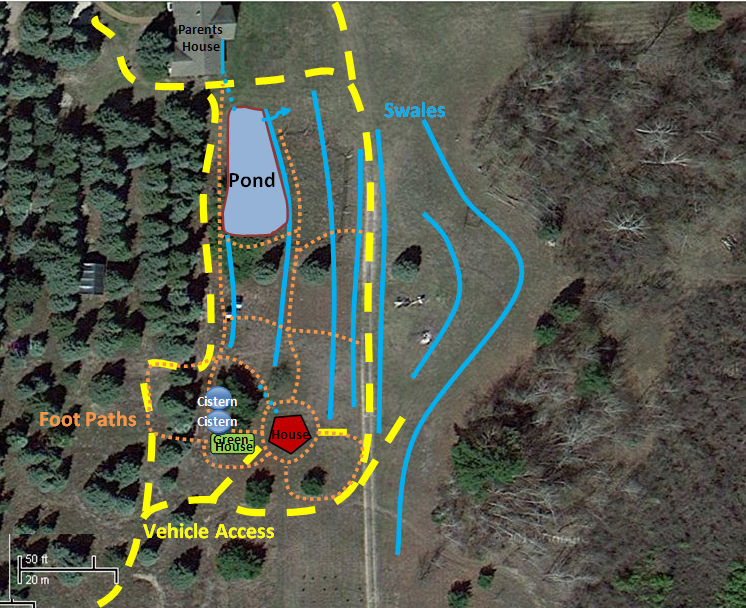 Approach: The principles that inform my water management strategy are…

Swales: Since the slope is gradual, the swales can be shallow and wide. They will be spaced far enough apart to allow vehicle access between them. The existing two-track is the lowest point and tends to collect water, so I will build swales on either side to capture and soak the water where it’s needed before it goes onto the road.

Pond: The pond location was chosen because it can be fed from the roof runoff, and is still a higher elevation than most of the swales and gardens, to allow for gravity irrigation. The pond is approximately 2000 ft sq. and 9 ft deep giving roughly 67,000 gallons of above ground water storage. The roof will capture about 44,000 gallons per year, which is more than enough to keep the pond charged. The pond will be sealed using the Glee technique using leaves from the city, weeds from the lake, and pigs in it to compact and manure the pond. Also, the depth should prevent it from freezing through, which means fish can live in it year round such as perch, bluegill, bass, carp and catfish as well as some crawfish, clams, and frogs.

Cisterns: Two 1500 gallon cisterns will be used to store roof run off from the house and greenhouse, also in an elevated position as well as built on raised platforms to allow for gravity irrigation. They are protected from the suns damaging effect by the greenhouse and pine trees, and will eventually be covered with a trellis and climbing plants.

Drinking Water: Will be piped underground from the neighboring house electric well to the main house and greenhouse.

Access: Driveway enters from the west, connects with existing two-track then connects up around neighboring house. Vehicle access also maintained for the materials storage area. Foot paths radiate out from the house like spokes of a wheel, and connect together forming a flower petal pattern for efficient movement across the site.