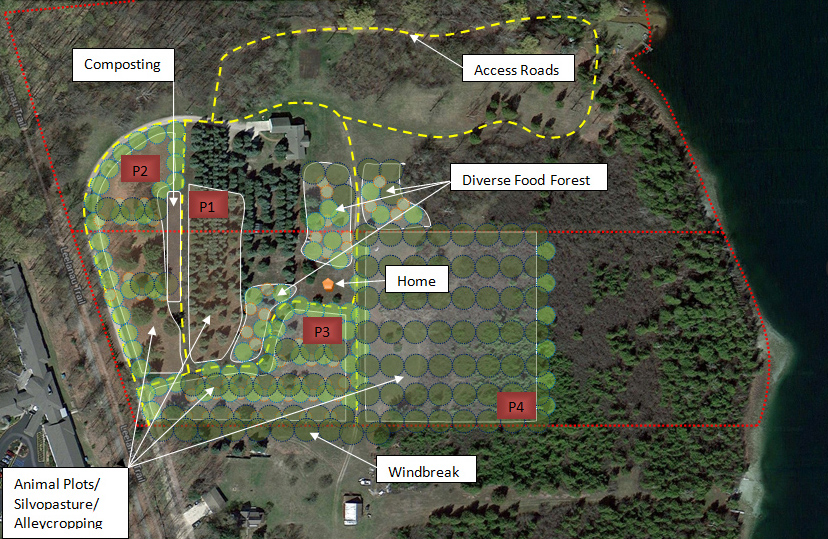 Diverse Food Forest:  Near the house are patches of diverse food forest that is more heavily managed, and serves as the mother colony of beneficial species. This will also make for good chicken forage area, as well as some annual crop production mixed in. These areas tend to major in small fruit trees.

Canopy Pattern: When designing the canopy, I tried to keep it 40-60% open to allow light in for the undergrowth plants. During establishment, I plant the trees and shrubs closer than desired. This allows for a larger harvest during the young years. As they mature and start to crowd in, I’ll thin some out, removed those that don’t produce as well. I’m selecting for disease resistance, size of crop, and earliest year of crop production.

Animal Plots: The animal fodder system is based off Mark Shepard’s work in Restoration Agriculture, and silvopasture agroforestry systems. Each of the four main plots (P1-P4) will be surrounded by perimeter fence, then smaller paddocks will be created within these using moveable electric fencing. We always try to keep the animals moving onto new ground. (Cows-smaller pens daily, Pigs-larger pens weekly) This is known as mob-grazing, or a paddock-shift system. This allows the pasture to rest and recover leading to increased pasture and soil health. By combining the tree crops with the animals pasture, we provide shelter from the sun and wind, reducing animal stress. The trees reduce erosion while  increasing yield in the space since the sky above the pasture wouldn’t otherwise be used. It also helps supplement the need for imported feed, especially for pigs, who eat the fallen fruit and nuts.

In addition to this, I will cover-crop behind the pigs until a good mix of fodder crops are growing on the pasture as well (alfalfa, rye, squash, pumpkins, sugar beets, clover, amaranth, sunflower, sunchokes, radishes, peas, beans, chickweed, dandelion, plantain and more). The pasture will benefit from the fertilizing and soil building edge effect of the perennials. Some of these alleys between the trees can also be used for hay or annual crop production on rotation.

Composting: We’ve developed a partnership with ‘Bay Area Recycling for Charities’ who collect all the food waste in the city and compost it. They have begun composting at Realeyes Homestead which helps us build the organic matter in our soil. We also use the expired organic produce from the local food co-op, Oryana, as the main feed supply for our pigs. We do supplement them with some non-GMO grain feed. The chickens also enjoy the bounty of crawling critters in the compost piles.

Windbreak: Strong winds tend to blow across the field from the south on this property, so we can block this with a dense windbreak along the southern boundary. Korean nut pine would make a great option here because it’s an evergreen so it would be an effective windbreak year-round; while also producing a crop of pine nuts.

P1:  (.6 acre) This area is already densely populated with blue spruce trees. It makes a good pen for overwintering the pigs because it provides shelter from the cold and wind, and can’t be used for much else due to the deep shade. Once the pigs move into new paddocks this spring we will try to establish a groundcover of Wintergreen,  Solomon’s seal, and Pink Purslane, all of which are adapted to an acid, shaded habitat and are edible for pigs and humans.

P2: (1acre) This area has an established patch of oaks which indicates that chestnuts will also probably do well here. We plan to move the pigs into this section during the fall when the acorns are dropping which will be like manna from heaven to them.

P3: (1acre) This plot will provide additional pasture for the animals, as well as alley-crop production. It’s very dry and exposed, so we will select perennial species which fit this habitat. It will also benefit greatly from some pioneer trees like Italian Alder, and a windbreak to the south.

P4: (3acres) This area is mostly covered in a thicket of grey dogwood. We would like to use a combination of pigs and goats or sheep to clear out the dogwood, leaving the mature cedars. We will then plant in alleys of multifunctional polycultures, like the other plots. The soil here, however, is much more moist with higher organic matter so we will select species adapted to this habitat including elderberry, highbush cranberry, hazelnut, pawpaw etc.  The tree’s are planted in east-west orientation because this allows the trees to get the most even sun exposure. We would usually plant the rows on swale-berms on contour, but decided this wouldn’t be necessary due to the minimal slope, high water table, and fast drainage of the sandy soil. 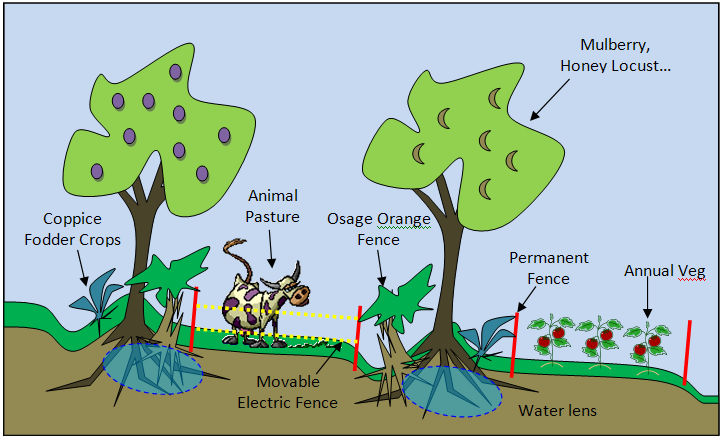