Current State: There’s no way to get around it, the soil on site is in extremely poor shape. It’s almost totally sand, with very little organic matter. A soil test has determined that it’s acid with a PH of 4.8 with low P, K, Mg, and Ca. Digging a test hole has unearthed a hardpan layer of compaction about 2.5ft down. This is probably a self-cementing calcium-iron hardpan because it’s orange in color. This means that if we try breaking it up mechanically with a subsoil plow, it will probably re-seal itself. So we will focus on building the top 2 ft of soil. The sand makes for soil that is very dry as the water and nutrients quickly leach down into the ground. Building organic matter content will be critical, as will raising the pH so more nutrients are available to the plants. 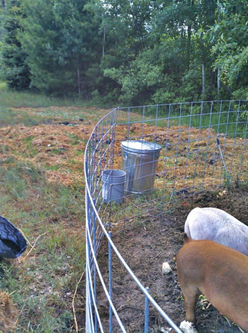 Animal Tractoring: The soil is beginning to be rebuilt through the use of movable pens for animals such as hens and pigs. The pigs root and turn over the soil through their natural behavior of looking for food. This behavior can be utilized to prep areas for cover crops by eliminating competing plants, and adding some fertilizer. I’ve already begun using this technique and have had great success out-competing the aggressive spotted knapweed.

Cover Cropping:  I’ll begin with a very diverse mix of cover crops to see what grows best here, including various pasture grasses, sunflower, chicory, orchard grass, festulolium, bird’s foot trefoil, oats, peas, radish, squash, alfalfa, rye, vetch, beans, buckwheat, wildflowers, and clovers. In the garden areas I’ll use buckwheat during the growing season and cut when it flowers so it doesn’t go to seed. For a winter cover crop I’ll use oats and field peas which will die before going to seed from the freeze. After broadcasting the seeds by hand, I rake them in with a high wheel cultivator, and then cover the area with straw. Sometimes I’ll dig mini-swales to aid in moisture retention. I’m still experimenting with the best procedure for this process.

Lime: The acidity of the soil makes it inhospitable to most plant species we would like growing there, so raising the pH with applications of lime will be necessary. We’ll start out with 2 tons/acre tilled in with a chisel plow. Over time, (every 10 yrs) the soil will start to go acid again due to the acid rain, so we’ll top-dress the fields with a lighter application of lime until the food forest has begun self-managing the soil pH.

Pioneer Trees: In my food forest, I’ll do a dense planting of Italian Alder, sea berry, and california false indigo which are fast growing nitrogen fixers which build nitrogen in the soil in order to fertilize the fruit and nut trees as they get established. Italian Alder is ideal because it doesn’t spread through rhizomes like Black Locust, yet is fast growing, coppices, and makes a good fuel wood. Once my main crop trees mature, I’ll either keep the Alder coppiced low to the ground, or cut it and suffocate the stump with some metal until the roots rot.

Importing OM: While it’s labor and resource intensive to import organic matter (such as woodchips, spoiled hay, manure, leaves and compost) for the whole site, it does make sense to bring it in to kick start the zone 1 plantings such as the kitchen, herb, and main crop gardens. It also makes sense to import some clay which will help the soil retain more moisture as a sandy-loam instead of pure sand. I will be talking to local farmers with access to manure and spreader, and see if they can come spread some on my site. I’ve also been collecting spoiled bales of hay that have gotten too wet and aren’t good for animal feed anymore. These can be broken apart and spread.

Hugelkulture: Burying wood in my garden beds and swale berms increases organic matter in the soil, thereby increasing its ability to retain water and nutrients.