Region: Cold-Temperate, Zone 5b, We have four seasons which means a fresh start every spring, and long growing days in the summer. However this makes for a relatively short growing season so provision for food preservation and storage is essential.

Precipitation: Average rainfall is 3 inches per month. Autumn has the highest precipitation. Late winter has the least precipitation, but due to the snow melt, is one of the wettest times. The largest single historic event was 7 inches. There is some potential for droughts, especially with the changing global climate and the local sandy soil conditions. Land History: This site has been in my family for several generations and used to be an active family farm. They produced mainly corn and beans and also had gardens, cows, pigs, chickens and more. It hasn’t been farmed in 40 years, and was planted out to Blue Spruce for Christmas trees 30 years ago. Most of these have now grown over 40ft and are spaced very close together. There were some apple trees planted on the property long ago which are still growing and producing well, although they could do better with some underplanting, mulching and pruning, and perhaps a foliar spray to deter fungal disease, and pests.

Wind: Prevailing wind out of the South/SW, confirmed by local wind flagging 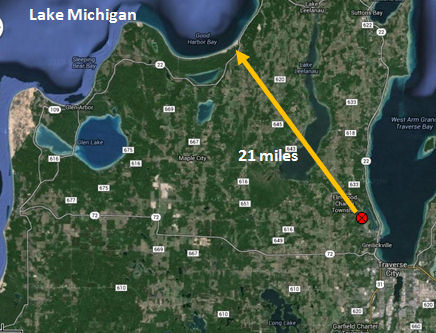 Slope: Very minimal. About 2ft over 100ft towards the lake (east)