Then the oil age allowed us to do the wrong things with unprecedented speed and efficiency.

Oil is an almost ideal energy source. It is relatively easy to extract (until recently) requires little refining, and has an extremely high energy density. The only problem is that there’s not an endless supply of it. To get an idea of just how huge of an impact this has, consider if we were to attempt to replace all the “work” done by oil with human labor: 1 barrel of oil is equivalent to 12 men working full time for an entire year. That’s 25,000 man hours for just the $100 or whatever the going rate of a barrel of oil. (That’s $.004/hour which is effectively slavery. source and calculation details) Now perhaps you can understand the leverage this gives any people who wield this power, not unlike the ancient pharaohs with their armies of slaves building the pyramids. The entire modern economic and agricultural model hinges on cheap oil to fuel all the trucks and ships moving products around the globe, to power the combines and tractors, to provide the fuel for our cars to get us all to work, and to the stores every day etc. The average American uses 60+ barrels of oil per year, that’s an equivalent of each person having 720 full-time slaves!

The entire modern economic and agricultural model hinges on cheap oil to fuel all the trucks and ships moving products around the globe, to power the combines and tractors, to provide the fuel for our cars to get us all to work, and to the stores every day. 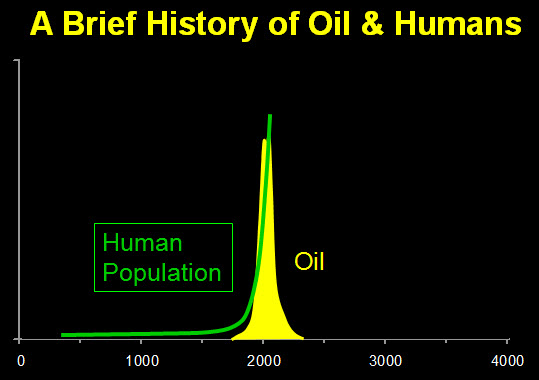 Oil, as well as most of our other main energy sources; coal, natural gas along with all metals and rare earth elements used in our everyday devices; the gold in our electronics and jewelry boxes, the copper in our wires and plumbing, the aluminum in our packaging and products, these are all non-renewable resources. This means that natural processes don’t regenerate them, or only on a geological timescale of millions of years. This means there’s only so much out there to use. We’re not necessarily going to run out completely for a really long time, but as we deplete the large, easy to reach deposits, finding more will be ever more energy intensive, and ecologically destructive. Just look into the Tar Sands as an example. What I’ve just described to you is a well known pattern within non-renewable resource extraction called the Hubbert Peak.

What happens when a business model that was built when gas was $3/gallon has to adapt to $10/gallon prices? A lot less people are going to be driving to your fitness gym, I’ll tell you that much! It’s not a question of If, simply a question of When. And if not in our lifetimes, does that make it any less significant that we’ll be leaving our children a world that runs on cheap oil, without the cheap oil to run it? Can a body survive without blood? Not for long. So how should we value the remaining supply of oil? Very highly! Since we’ll never get such easy access to such abundant energy again as a species, so it’s critical right NOW while we still have it, to use it to rebuild our infrastructure to be less dependent on it. IE; Homesteading and permaculture. This is also the thrust of the Transition Town Movement.

It’s critical right NOW while we still have cheap oil, to use it to rebuild our infrastructure to be less dependent on it.

Oh but there’s one other sticky thing about Oil…

The burning of fossil fuels such as oil is one of the leading contributors to Climate Change. This has been a highly debated topic recently, so I’ll just address it in another post. What the research is telling us though, is that we need to cut fossil fuel use 40% by 2015, 70% by 2020, and 90% by 2030 in order to avoid a number of positive feedback loops that would send the climate spiraling out of control. (K. Anderson). Needless to say, whether you believe in Climate Change or not, you can’t deny the over-extraction of limited natural resources over the last 100 years and that such behavior will stop, one way or another.
<!––nextpage––>

Globalized communication and transport led to the centralization of production, wealth and power.

Where in the past, most of a communities needs were produced within a few miles around from many family owned and operated shops, now the majority of our resources have made a journey from many sparse corners of the globe, to a large central facility where they’re processed and constructed then shipped many thousands of miles again to us. Not only is this dependent upon cheap abundant energy, but it makes for an impoverished relationship with the goods and products in our lives, as well as those who made them. Instead of tools and recipes having a rich history, passed down along with them, lovingly maintained by our family members with whom we grew up; they come from the store, and if they break (which they often do now on account of planned obsolescence) we can just go to the store and get another. We are completely veiled from the process of creation which often involves the exploitation of economically disadvantaged peoples in other countries, as well as damage to far off ecosystems due to over-extraction or pollution.

This trend towards centralization of production also took hold of agriculture, as GPS guided combines allowed a few farmers to farm millions of acres of cropland. The family farm that was a central feature of american life was replaced by large warehouses full of animals being raised in confinement. In 1790, farmers made up 90% of the labor force, whereas now farmers make up less than 2% of the labor force.  Suddenly most people were removed from that most basic pastime of animals; procuring their food. With it, away went the skills and knowledge to do so.

If your neighbor was providing your food, and you noticed his food made you sick, you would be able to get together with the other neighbors and boycott his products if he doesn’t change his practices. But this feedback system doesn’t work as well on the global scale because there are many hidden externalities, and often there is no alternative product to switch to because every company is doing the same bullshit. Those that are small, local and healthy can’t compete on price due to economies of scale that the corporations benefit from. Not only this, say all the factory workers in China who make our nerf guns and doggie toys decided to have an uprising, the government will use it’s military to defend the interests of the company (who funds the government) more than the “people” it’s supposed to represent and protect. For all the lofty talk about Democracy, we’re in fact living in a global Plutocracy.